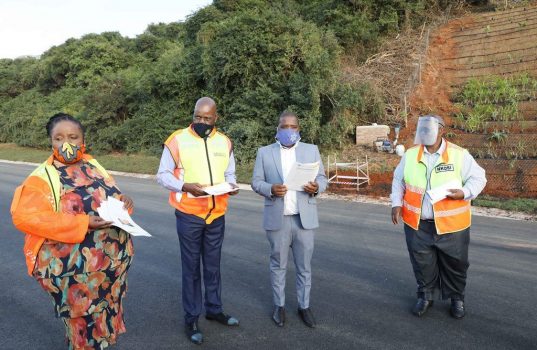 M4 to be re-opened after six months of closure

The M4 Ruth First Highway, in Durban, will officially be re-opened next week after it was closed for six months following heavy floods last year.

Tabling his 2020/2021 budget policy statement virtually to Members of the Provincial Legislature MEC for Transport, Community Safety and Liaison, Bheki Ntuli personally inspected the major arterial today and declared it ready to be re-opened. This repair was estimated at a cost of R45 Million.

The M4 route is a key economic node and major arterial that provides access between the Durban CBD and the northern areas of the eThekwini and iLembe district municipalities. These include La Lucia, Umhlanga, La Mercy, Umdloti and Ballito. Travelers between the King Shaka International Airport and the City mainly use this road as it is an alternative route to the N2 between the two destinations.

The heavy rains experienced last year resulted in the erosion of the embankment, which led to the road becoming undermined and eventually failing up to the road center-line joint.

“Our initial plan was to open the road to traffic by end of April 2020 – however, due to the lockdown period, we had to adjust our target. I can report that I have personally conducted the inspection of the project this morning and I can now safely report that the road is now ready to be opened for traffic next week,” said MEC Ntuli.

MEC Ntuli stated that the Department’s R11,6 billion budget policy statement would seek to create a transportation system that is an enabler to economic growth and development.

Other major economic nodes that will be upgraded working with SANRAL will include the N2/N3 upgrade, Isandlwana Road P372, D1021 Mshwathi River Crossings and KwaXimba bridge, P709 link to N2-N2 to Amatigulu and M7 Widening from Pinetown to the Harbour.

The N2/N3 upgrades will allow for easy traffic flow of freight and other road users. The first phase will be at a value of R9 billion and construction will commence once the lockdown regulations have been eased further.

The Department of Transport is in the process of finalising the Memorandum of Understanding (MoU) for upgrading the roads leading to the Isandlwana Heritage site with SANRAL. The upgrade of this 31-kilometres road will improve the economy of the area as the Isandlwana Heritage site will promote tourism within the area. The current estimation for the project is R170 million.

MEC Ntuli said an MoU had been finalised with SANRAL for the upgrading of low-level structures on D1021.

“We are also engaged in intense discussions over the capacity improvement for KwaXimba bridge on P423 on the Msunduzi River where there have been two major fatal accidents,” he said.

“Work on the N2 near Ballito will resume after it was halted more than two years ago due to a protracted court battle. The court battle has been settled and we thank our people for their patience,” said MEC Ntuli.

He also said there will be capacity improvements for main road M7 from Pinetown to N2 South Freeway in order to allow traffic to flow freely. There will also be an upgrade of the N2/M7 interchange to a full interchange where there is a continuous flow of traffic.

« Coming out of lockdown, what does your brand equity look like? Transport Deputy Minister to asses Mpumalanga’s public transport compliance to Covid-19 regulations »