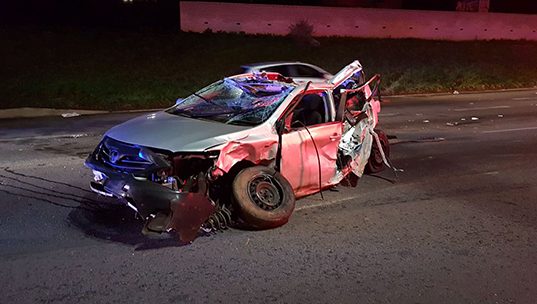 Three people were killed and a child critically injured in the early hours of this morning when a light motor vehicle crashed into the roadside barriers on the M1 northbound highway near the Corlett Drive offramp in Johannesburg.

ER24 paramedics arrived on the scene to find the wrecked light motor vehicle in the middle of the highway. The occupants, that had been traveling in the vehicle, had been ejected and were found lying some distance away.

Paramedics assessed the patients and found that a man and woman had sustained numerous injuries and showed no signs of life. Unfortunately, nothing could be done for them and they were declared dead at the scene.

A man, as well as a young child, were assessed and found to be in a critical condition.  Paramedics treated the two patients and provided them with advanced life support interventions. Once treated, the patients were transported to nearby hospitals for further treatment.

Unfortunately, on route to hospitals, the critically injured man finally succumbed to his injuries and was declared dead.

Local authorities were on the scene for further investigations.