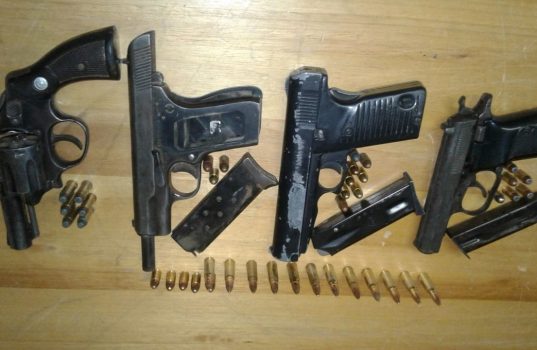 The recently launched National Public Order Policing Reserve notched their first good successes at Amangwe near Estcourt. In the early hours of the morning yesterday, the NPOP Reserve Unit based in KwaZulu-Natal assisted by Amangwe police officers conducted operations at Amangwe following intelligence with regards to illegal firearms and ammunition. A total of ten suspects, aged between 20 and 46 years, were arrested for possession of unlicensed firearms and ammunition as well as dagga. They appeared in the Estcourt Magistrate’s Court yesterday with regards to these charges.

The KwaZulu-Natal Acting Provincial Commissioner praised the members for the arrests as well as the recovery of illegal firearms at Amangwe area. “This Unit is a great asset and they add more value in the provinces attempts to stem the proliferation of illegal firearms. We are also confident that they will also add impetus in dealing with violent protests and other serious crimes in the province,” he said.

« Temporary road closures at the Tshwane House on Thursday 12 April 2018. Body of actor recovered in the Drankensberg. »