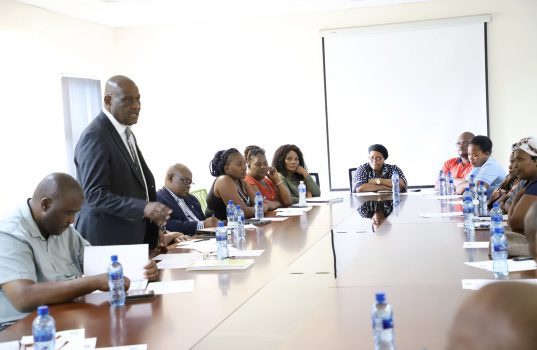 After several weeks of DNA testing to authenticate the remains of eight people who were burnt beyond recognition in a horror accident in Blood River earlier this year, MEC for Transport, Community Safety and Liaison, Mr Bheki Ntuli, today met families of four of the deceased to mourn with them the loss of their loved ones.

A minibus taxi collided head-on with a BMW 1Series on 05 January 2020 and upon impact, both vehicles caught alight claiming the lives of 10 people. Following the fatal crash, only two victims were easily identifiable and DNA tests had to be conducted on the remains of the eight other victims.

To-date six victims that were badly burnt have been identified, however, DNA results for two other victims were inconclusive and the tests will have to be repeated.

MEC Ntuli met with the families of the deceased at the uMfolozi Municipality to offer his condolences and support, but also to offer government services to the families during this period of grief.

“This crash was one of the most gruesome accidents I have ever experienced since I assumed office in this department. It pains me that families had to lose their loved ones who had a bright future ahead of them in such a horrific manner. This country has suffered a great loss as the victims would have contributed immensely to the economic growth and prosperity of our province,” said MEC Ntuli.

MEC Ntuli met with the four families in a small gathering following President Cyril Ramaphosa’s announcement on Sunday, declaring a national state of disaster in response to the outbreak of the Coronavirus.

“The Department adheres to the prohibition of public gatherings of no more than 100 people as a preventative measure to curb the spread of Coronavirus (Covid-19) infections. Therefore, we will not have a memorial service or a mass funeral for the deceased as per the Department’s mandate. However, the Department will continue to assist the families with all necessary arrangements for them to give their loved ones a dignified burial,” said MEC Ntuli.

MEC Ntuli further reassured the bereaved families that government was working tirelessly to finalise the DNA testing of the two remaining victims so that all families can find closure and bury their loved ones.